An app to enable agile teams to do effective remote Planning Poker estimations. 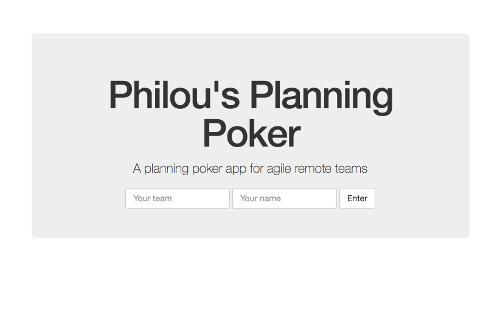 During my career as a software engineer, I am more and more working in teams that span over many places. At the same time, I am a great proponent of the agile way which favor co-located teams.

I am convinced that teams can be both remote and agile. Provided they have the correct tools.

This app enables remote teams to run effective poker planning sessions. Without it, they would use a video conference to share their estimates through the camera. With this app, a phone call is enough.

In the long run, it could improve the estimation experience for both remote and co-located teams :

How to use it

To do a remote planning poker session, you’ll all need 3 things :

Once this is ready, you should all go to https://philous-planning-poker.herokuapp.com/.

Here is a video demonstrating how the different contributors interact : 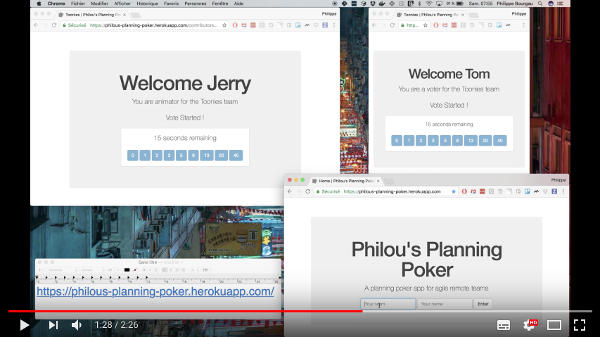 What if no one is the animator ?

You must have entered a team space that is already used and which already has an animator. Pick another team name to fix that.

I entered my team name and pseudo, but it seems I am alone !

You must have used a different team name. The tool is case sensitive, be sure to use exactly the same team name.

Here are the main current limitations of the tool :

Anyone could fix these if needed.

I’d appreciate your feedback about this tool. Whether

The tool is open source, under the Apache License 2.0. Among other things, this means that :

Check the source code on Github to learn how to do this.

How to run it

The app is continuously deployed to Heroku at https://philous-planning-poker.herokuapp.com/.

Deploying to your own Heroku app is straightforward. It only requires an SQL DB and a Redis server. Here is the way to go :

Your app should be running in the cloud !

Deploying on a local machine or server is pretty simple too.

You need to have a few things installed first :

Then, clone the repo :

They are managed with bundler. Just run the following :

bundle might complain that some dependencies are missing on your OS, in this case follow its advices and install them.

There is a docker compose configuration to start services dependencies. You can either use docker, or start these services yourself. Here is the docker way.

You’ll need to have docker and docker compose installed :

Then, run the following to create the database :

The db should be started from previous step. Start the rails server the typical way

Check that it’s running at http://localhost:3000

Issues and user stories are maintained in the github issues of this repo. ZenHub is a nice addition to visualize and prioritize the tasks to work on.

There is a TravisCI Job continuously building any change on the github repo. When the build passes, the app is automatically deployed to Heroku.

The repo is also linked to a Code Climate project which performs static code analysis and monitors code issues.